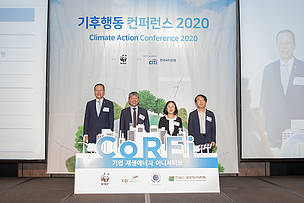 © WWF-Korea
WWF-Korea held the ‘Climate Action Conference 2020’ on Jun, 24 with ‘Ways to enhance climate actions with net-zero targets for achieving the goal of the Paris Agreement towards a 1.5℃ world’ as the overall theme. Government bodies, corporate entities and financial institutions gathered to discuss the urgency for climate action.

The year 2020 is a critical point in time for closing the gap between the current commitments worldwide and the goal of the Paris Agreement to limit temperature increase to 1.5 degrees: Each country needs to submit ‘Nationally Determined Contributions (NDC)’ and ‘2050 Long-Term Low Emission Development Strategy (LEDS)’ to the United Nations Framework Convention on Climate Change (UNFCCC) by 2020. In the case of Korea, discussions on LEDS and NDC could gain momentum which has been built upon Green New Deal suggestions by the government and parties, especially after the COVID-19 outbreak. In order to accelerate and enhance climate ambitions and actions amongst stakeholders in Korea, WWF-Korea hosted a conference to share global leading cases to be referred to and reflected in commitments and actions from governance, markets and finance perspectives.

At the conference, Sung-hwan Son, Chair of WWF-Korea, Yeon-Chul Yoo, Ambassador of climate change from the Ministry of Foreign Affairs, Simon Smith, Ambassador of the British Embassy Seoul participated showing high interest in Korea’s climate action. Ki-moon Ban shared his view and role of the conference through a pre-recorded video. In his opening remarks, Sung-hwan Son said “Nobody can be excluded from climate impacts. Everyone should take responsibility and enhance climate action to solve this common crisis.” Yeon-Chul Yoo, mentioned that “As the core of long term strategy comes from setting 2050 GHG targets, today’s conference was extremely well-timed. Humanity will face huge costs if we do not fight with climate change in the long run.”

Afterwards, WWF, UNGC, KOSIF and KSNRE co-hosted the ‘Corporate Renewable Energy initiative (COREi)’ in order to expand corporate renewable energy usage. For the keynote speech, Simon Smith, Ambassador of the British Embassy Seoul presented UK’s climate leadership and Gunther Thallinger, CIO of the Allianz group emphasized climate action for achieving 1.5 target through net-zero targets set by governments and financial institutions. In the second session, presentations and panel discussions on ‘Sectoral decarbonisation commitment to actions’ were held by the Embassy of Denmark, Korea. The last session ended with the topic ‘Influencing climate action in society’ by H&M and WWF.

Approximately 100 participants from government, academics and public citizens interested in climate and energy issues were present at the conference hosted by WWF-Korea and sponsored by Citi Foundation. Due to COVID-19, there was a limitation in accepting participants. All sessions were recorded and will be available soon.